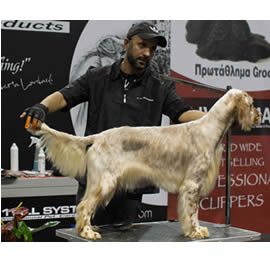 Fanis Chiliotis
Greece | Professional groomer
Professional groomer & member of the Greek Grooming Association (ESEKS), he has been keeping a grooming salon in Thessaloniki since 2002 and a grooming school for the last six years. He has many success in the dog shows as a winner of a grade, both in Greece and abroad, with his own dogs such as Old English Shepherd (Bobtail), Pomeranian and English Setter. In 2006 he was awarded the second place in the Poodles Class in a national grooming contest in Greece, presenting his dog with Modern Clip. In 2015 he won the first place in the first international grooming competition in Greece in the Spaniels & Setters Class, presenting an English Setter. In October 2015, participating in the Greek Grooming National Team, he competed in the World Championship held in Milan, in the "Spaniels & Setters" class. In May 2016 he won the first place in the second international grooming competition in Greece in Spaniels & Setters class, presenting a Gordon Setter. As a member of the Greek Grooming Team, he competed for Greece in the 2017 World Championship, and now he works in Pets Avenue grooming salon & pet store, in Glyfada.