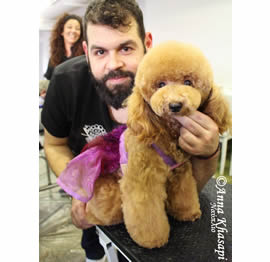 Fragkiskos Tasoulas
Greece | Professional Master Groomer
Professional Master Groomer, judge IGU and vice-president of the Greek Grooming Association (ESEKS), owner of grooming salon and Juniors’ Groomers Education School. Over the last seven years he has achieved many distinctions in dog shows where, among other things, with his participation in the World Dog Show he won the second place. His career as a show groomer started in 2013 at the National Grooming competition Contest, winning the first place in the Poodles intermediate class. In 2014 he rejoins the national championship, taking the first place in the class Poodles open class as well as the second place in stripping in the open class. In 2015 he is the second in Poodles open class in the first International Grooming Competition in Greece. In 2016 he again participated in the International Competition in Greece and won the first place in the Poodles open class as well as participating in the Greek Championship, winning the Poodles Champion class again and coming out "Best in show". In 2017, with his participation in the International Competition, he again takes the first place in the Poodles champion class and goes back to "Best in show". He was then selected to represent the National Grooming Team of Greece in the World Championship in 2015 in Milan and then for the second consecutive time in 2017 in the World Championship in France. All these years he has attended over thirty seminars and workshop seminars where the best groomers in the world have attended. Since 2015 he has also been a main speaker in grooming and workshop seminars with a greater distinction in the Double Seminar and International Competition in South Korea, where he attended as an International Grooming Union judge (IGU)